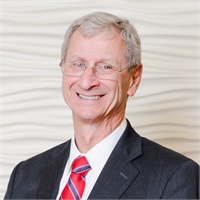 Joe Salamone, a native of Upper St. Clair PA is a graduate from Westminster College with a Bachelor’s degree in Education. He began his career as a Spanish teacher at Mon Valley Catholic High School. Along with teaching Joe enjoyed being the head coach of Mon Valley’s track team and an assistant coach of the football team. After teaching for few years, the business world began to look inviting to him.

Joe decided to step into the financial industry by working for Liberty Mutual Insurance, specializing in workman’s compensation claims. After spending two years in up-state New York, the company transferred him to Cincinnati, Ohio where his efforts helped to reduce the company’s expenses by approximately fifty percent. As a reward for his accomplishments he was offered a promotion that included a transfer to Toledo.  As Joe would say, “No one moves to Toledo!” Fortunately, at about that time Joe started to date his future wife, Noreen. This made leaving the Ohio job and moving to Pittsburgh an easy decision for him. Joe was given a great opportunity by Lincoln Financial Advisors to become a Financial Planner and for the next twenty-six years he worked on building his financial planning and asset management practice. On March 1, 2000, Joe became the first fully licensed advisor to join BenchMark Financial Network, now BenchMark Wealth Management. Joe currently holds a series 7, 63, and 65 registrations, as well as being licensed in life, accident and health insurance.

In 1985, Joe faced a battle with cancer that caused him to rethink his career and family goals. He decided to specialize in the asset management portion of his practice. Joe was fortunate to survive cancer and continued to transition his practice to a fee based asset management style, an approach that provides clients with a vastly greater variety of investment options and the flexibility to change course if necessary. Joe continues to use his background as an educator in his efforts to teach his clients as much as possible about their investment portfolios. His integrity and commitment to his family and his clients are demonstrated by these words, “You can’t always be right but you can always do right.”

In his free time, Joe enjoys going to dinner and the theater with his wife of forty-plus years.  Joe and Noreen also enjoy season tickets to University of Pittsburgh basketball and football games, traveling when they can and spending as much time as possible with their children and grandchildren. Once a year, their extended family, all thirty-six of them, get together for a week-long vacation; either at the beach or camping.

Their four children, Kristen, Erin, Justin and Carlyn have all graduated college and are now independent young adults, productively contributing to society and starting families of their own. Five grandchildren are now part of the family, with hopes of several more. Justin is in the process of joining his father in his practice and Joe remains hopeful that one or two more will consider joining him in the financial industry.

Joe’s wide spectrum of experiences has helped him to grow not only in life, but also in his business.  He loves his job and never wants to retire.